From ‘Fairyland’ to Reality

My name is Julianna Keresztes, a volunteer in Totvázsony. In mid-January 2015 I arrived at Totvázsony , a small village in the North of Balaton, Hungary, from the small village of my famous ‘fairyland’, Kisbacon, Covasna county, Transylvania. The name of Kisbacon might sound familiar to those who in their childhood used to listen to or read tales by our great fabulist Benedek Elek. My own story also comes from that small village.

I skip back to the year of 2011 when I first met EVS, by the time when I had the opportunity to spend three weeks with a group of volunteers in Nagyvázsony. Thanks to these days and to the other volunteers‘stories about their personal experiences I decided to become a volunteer. I also planned to do it in the same place I already knew. This was a quite quick and great decision but the way to ‘reality’ was very long. I was only a second-year student at that time and I wanted to finish my studies first. After I graduated university, I was looking for a job in my profession as an economist. This was not an easy task to a recently graduated young man over there. While waiting for a positive answer to my job application, I tried to find a suitable project for volunteers. Unfortunately, I could not find any, I failed three times. Finally I found a job in Kisbacon at Bodvai Association where I had already been an active member before. I had been familiar with different kinds of administrative activities and I also took part in many others like managing programs with children and teenagers.

In December last year I finally succeeded and found a suitable volunteer project with the help of GREEN SUN Association. After a month time training with them, I arrived at Totvazsony, last January. At the beginning I was lost in the great number of new faces and much work but I really enjoyed this new challenge. I got acquainted with new people and learnt something new every day. Little by little I got used to the everyday life of the association. Some of the various kinds of duties are: I made local TV broadcasting's, set up activities in the library and the tel-house, handicrafts, screening, teahouse, summer school for children, took part in ‘Savanyo Jóska ‘Days , and so on. Besides I made timetables, posters and learnt how to be a good quality photographer. We were eight people working together. They were all kind and friendly and I was received into their team from the very beginning. After a month another volunteer girl arrived from Kárpátalja, and another one from Germany, too. We all agreed to spend our leisure time together, touring , visiting many towns and places in the country, going to festivals, meeting new volunteers from Germany, France and Transylvania collecting interesting experiences day by day. We could easily get into very close relations with the other volunteers because we all were in the same boat .We all came from faraway places being totally on our own, leaving back our families and friends. We all learnt something new about our personal qualities , and discovered a new world around us. Some of our most interesting activities together are boating at Tapolca, wandering about in Budapest streets in the night, we visited the town of Pecs, a nice cultural center where we met some other volunteers during the two days spent there. Sometimes we went cycling, we spent afternoons just talking, barbecued in the night and cooked the other day together again paying visits between ourselves by turns. An exciting four day trip was the cycling tour around Balaton-lake. We biked about fifty kilometers a day. We stopped here and there, admired the wonderful landscapes and enjoyed visiting the interesting new places. We sometimes swam in the lake and had a gorgeous time together during those four days that proved to be the days of my life. Another important aspect of our volunteer life was the good relationship with the local people from the village. We often tripped together, had nice times together in the pub, so they were also part of our volunteer life there. Towards the end of the summer I began to feel I belonged to that place as if I had never lived in an other place before. In fact anybody could get accustomed to that care-free, light-hearted life we lived there, however, I really missed my family and friends left behind. I would have shared all my experiences with them. It was the experience of my life, I felt my dreams had come to reality being an EVS volunteer.

I got more from it than I had ever expected. One year ago I could hardly think my life would change so much. It was the most substantial and formative year of my life. I can hardly find words to describe it, you must experience it by yourself. Looking back again, I want to underline there were both ups and downs, hard challenges that I had to pass. For instance I had to overcome my homesick. Then I can remember another difficult period that I had to master when I spent six weeks among little children. I had to take care of a twelve year old boy who was suffering of autism. At the beginning I was very nervous as I did not know what problems might have occurred with him. Finally it was him who taught me some nice human values like acceptance, tolerance, openheartedness, affection, and that we must be free of any prejudice. He used to visit me even after our time together. I think we both could give each other something good. Summing up, EVS is quite a strange, impressing way of life. You are often supposed to leave your comfort limits. You can also learn that, sometimes, what you think impossible to work finally turns out to work. They say, EVS is the best way to know yourself, to know other countries and people and to learn foreign languages as well. You have to try EVS! Take courage and start boldly on the great adventure! 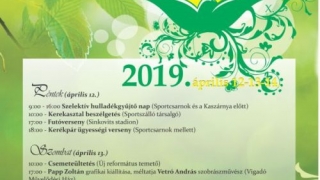 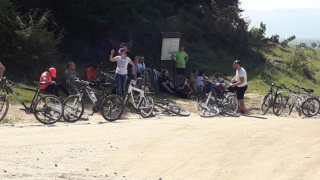 Hop on Your Bike! Bike tours are starting on the Nemere Trail