The “On The Green Road” project has come to an end

On 6th January the On the green road project has come to an end. The activities of the past 11 months were evaluated in the office of the association by Ráduly Attila, president of the Green Sun Association and Derzsi Katalin, project mentor. This was the 2nd program of this kind in the guild city. The On the green road project was won, and conducted by the Green Sun Association and it was realized by the support of the Youth in Action program.The aim of the program was to develop the Nemere Trail green path and to highlight the importance of environmental education. During the development of the trail there was published a 100 paged book about Háromszék’s longest green path, the Nemere Trail portal got a new design, new look, there were developed board games which presents the trail, a movie was shot presenting the trail, which as a tourist attractor gives an insight of the natural and cultural values of our region. At the same time, there were organized several bicycle tours, presentations, exhibitions and various, colorful events as dissemination. During the 11 months-long project the greens paid special attention to promote the opportunities offered by the European Voluntary Service (EVS). Nothing proves this better than the results: in the past few months they managed to involve in the voluntary service 4 sekler youths, who undertook voluntary abroad for shorter or longer periods of time. „We believe that, just like in 2012, we closed a successful year. Elaine Ivassenko, Emmanuelle Baillet and Gema Puerma Castillo EVS girls have gained new knowledge which will serve as an advantage in their future. New languages were learnt, different events were organized in the county’s different regions which moved hundreds of people, and last, but not least we learnt to be more tolerant and to accept the otherness.”- evaluated the project coordinator. The greens plan to receive 3 more volunteers this year. Author: Ráduly Attila Translated by Péter Csilla 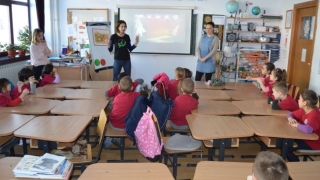 They promoted the movement in the Green Sun School 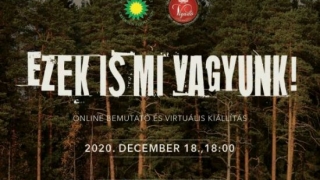 Photo exhibition "Ezek is mi vagyunk!" (We, from another perspective!)