Bike for a good aim

On 13th September 150 cyclists met in Sepsiszentgyorgy with the same goal, use bicycle for a healthy life and promotion of the community card. This event was organized by Community Foundation Háromszék (HKA). The photos about the event can be viewed on the Green Sun Association’s facebook page.

There were four teams, all differentiated by different colored t-shirts and each one with a differentiated aim: the red team were together for the elder people, the yellow team had the aim to got a new Karate carpet, the green team (30 participant in total, with the participation of six people from Green Sun Association) were together against the massive felling of trees in Szeklerland. Finally the blue team rides the bike for an outdoor fitness park. All those teams had to pay 15 Ron per person, in a concept of registration. The race started at 5 p.m. to 8 p.m. The route was 11km around the streets city and could do maximum five times. At 8:30p.m.h were announced the winners and the event concluded. 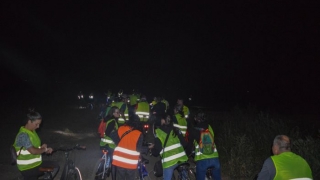