On 15th October at Kézdivásárhely took place a regional meeting organized by CIVEK (Civil Organizations Federation of Covasna County) for member-organizations of kézdiszék. The venue of the event was the Green Sun Association’s headquarter – special thanks for Attila Ráduly and his team for this. Photos taken at this event can be viewed on the Facebook page of the Green Sun association.

On the afternoon meeting 7 CIVEK member-organizations were represented by more than 20 representatives. On the event participated the Kézdiszékért Association, Szentkereszty Stephanie, Kelengye Association, Women’s Association of Kézdivásárhely with the greatest number of representatives, EMI of Háromszék, Green Sun Association who ensured the venue, Pro Pectus Association from whom everyone recieved a hug for the occasion of Hug Week, and last but not least the Siculus Radio and the Incitato Association. The meeting has started with the self-introduction of the participants in a good atmosphere. Most of the representatives of the associations of Kézdivásárhely already knew each other, but two persons from part of CIVEK- who are already working at the alliance- were unknown for most of the participants. After a brief introduction a free discussion has started. The main theme was the everyday activities of the NGOs, especially financing the programs of the NGOs. The conversation evolved into the direction of the CIVEK member-organizations and CIVEK’s connection, relationship among each other. There have been presented the expectations from the organisations towards the CIVEK. In this way we managed to clarify several things, and we came to the conclusion that each of us have to do something for the effective cooperation. Suggestions were also discussed, such as the extension of the Civil Promenade to Kézdivásárhely. The conversation continued in a more formal framework and we discussed the actual items on the agenda. First we discussed about the CIVEK Strategic Weekend, which will take place at Zabola on 19-20 October. Following this theme we fixed the appearance date of the Székely Courage at the end of November. We accept exciting reports and thought-provoking writings until the end of October. At this point of the agenda a demand was formulated for an online version of the Székely Courage, furthermore for the continousity of the appearance of this publication. The next item was the prospects for a presentation from the president of CEMO (Civil Engagement Movement), Enikő Szigeti at Kézdivásárhely. Furthermore a new demand was expressed regarding the organization of a training for the representatives of the NGOs, which would provide help for them in the aoccuntancy. The meeting lasted for more than 2 hours and it was a great opportunity for professional conversations, to cultivate relationships and for having a good mood! Thanks to everyone for your participation! 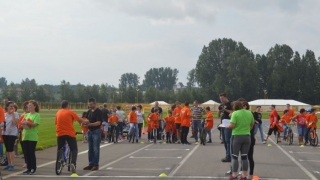