Bike for a good aim

At the gates of autumn, last September 19, 2014 in Sfântu Gheorghe, at 5 pm, began the "Bike for a good aim" event. Is a clear need to make people aware of the number of cyclists on our streets, and to have enough places to park bicycles. Photos of the event can be viewed on the association Facebook.

The event had been organized for the third time in the city by the Háromszéki Community Foundation. For this reason, more than 200 people gathered to register with their bicycles at the event which lasted almost all afternoon. Registration cost 15 lei, and each participant received a shirt with the names of the sponsors, a map with dots to go and complete a card at each stop with a sticker. Near to the registration cost all participants needed to donate for the good aim a sum between 5-10 lei or even more if they want. In addition participants also were supplied with water, cookies and cakes. Scattered around the city you got 9 locations to fill with bumpers the card, and the goal is to do the whole tour as often as possible. By late afternoon, the one who had made the trip more times is the winner and deservedly received a monetary reward. With the money raised at the event new bike racks will be placed in the city. Green Sun Association was present on this event with 8 volunteers, who had biked totally 140 km. That afternoon, when some of us already ended, met a woman at the mall selling ornaments and told us that her husband and son also participated in the event. She was very friendly, and even knew to say goodbye to us in Spanish. When all partake a little, you can make higher aspirations. 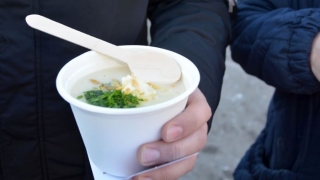