At this wednesday 14 of November Green Sun Association gathered together local people for Kurdish National evening at cultural house Vigadó - Kézdivásárhely (Targu Secuiesc). This was already the fourth national evening leaded by association - Latvian evening at March, Armenian at April. Turkish at May and German at June. Photos taken at this event can be viewed on the Facebook page of the Green Sun association.

Representatives for Kurdish national evening was two volunteers Şeyhmus Kardeş and Filiz Kaya from Dyiarbakir, Turkey. The young volunteers are involved in European Voluntary Service project and they are hosted by the HITI Voluntary Center in Sepsiszentgyörgy. The Kurds have often been described as the largest ethnic group in the world without their own state, numbering somewhere between 25 to 35 million in population. They mostly live in a region often referred to as Kurdistan, which stretches across the borders of Iran, Iraq, Syria, and Turkey. The largest population of Kurds live within the borders of modern-day Turkey numbering an estimated 15 million people, followed by Iran, Iraq, and Syria. They are the fourth largest ethnic group in the Middle East after the Arabs, Persians and Turks. National evening begins with preface from GSA president Ráduly Attila. Volunteers translated from English to Hungarian languages their project coordinator Grüman Éva- Orsolya. During the evening visitors learned more about Kurdish language, as they don't have special schools at Turkey, they speaks this language just at home. Singers can sing just about Love to dont make political war. After presentation local people had chance to taste Kurdish traditional food and drink. And enjoy traditional music and dances. Kurdish volunteers receive Szeklerland map as a gift from Péter János, member of honor in Green Sun Association. 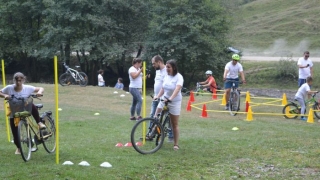 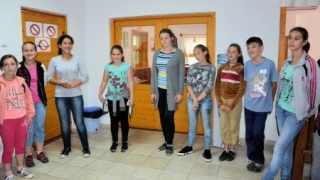