Tuesday 20th of January, Green Sun Association organized the French national evening presented by Céline Berthier, their French volunteer. Photos from the event are available on the Facebook page of the association.

Around 80 person went to the Vigadó cultural house in order to participate to this event. First, Céline presented her city and the main difference with Kézdivásárhely. Then she proved out how French stereotype are false (but sometime true also). She presented Paris and the evolution of the buildings. After this the audience performed a French traditional dance. At the end the public had the chance to taste to French gastronomy : la "pissaladière", la "quiche Lorraine", and some "beurre de sardine". She would like to thank all the volunteers from GSA for their help and also her students from the French lesson who provided encouragement and help for cooking. 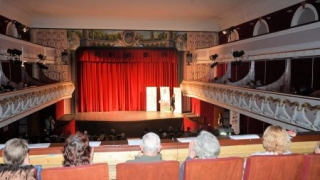