After learning how and where to put the accents in Spanish and discovering that is not possible to put more than one accent in the same word, the Spanish class reached its end. It was done in the Green Sun office in Kézdivásárhely, by the EVS volunteer Clara Bejarano Sánchez, Wednesdays at 18:00 during one hour. The last ten minutes was reserved to see a film with Spanish audio.

The name of the film was “How to train your dragon” and we had time to see the first film and begin the second one. Also it will come soon in the cinemas the 3 part. The participants were in a very diverse age and knowledge about Spanish language before starting the classes. For some of them it was a little bit more easy, and also because Spanish is similar to Romanian. We had a very good moments together but as we say “todo lo bueno termina” (all the good things will reach an end) but we also say “lo bueno, si es breve, dos veces bueno" (the good things, if it’s short, is double good). Anyway the Green Sun Association makes a lot of events and the good weather is coming back, so I hope we meet again. Thanks a lot! Clara Bejarano. 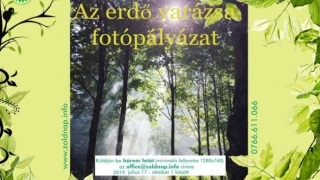 Magic of the forest photo contest