“This is a race” was the introduction of the instructions and map that every team received at the beginning of this new edition of the Treasure Hunt organized by the Green Sun Association. More photos of the event in the Facebook Page of the Association.

In this occasion, 9 teams competed to achieve one of the first positions in this edition of 2016. This time the route was traced by the southern part of Kezdi included in the Nemere Trail. Starting in the Fortyogo fountain and getting through villages like Ozsdola, Ghelence and Zabala every team tried to find the treasures which were hidden by the organization.  The end line was in Lecfalva where everybody meets together at the end of the day and after naming the winners, everybody had dinner and enjoyed with some drinks speaking about the day in the race and the anecdotes of the journey. When the night falls down and the fire lit stronger, the songs and dances bloomed around the fire.

After a long night sleeping in the school, some of us with our sleeping bags and some another cleverer, or luckier, with the few mattresses that the school provided, the new day came up and after a strong breakfast was the turn to come back home, now without rush and all together, enjoying a beautiful day of bike tour. After visiting the Lake of Rety we took the roads included in the Nemere Trail and after 60 km we arrived at home around midday.

In total every participant made more than 120 km in this funny event, that every year, grabs attention of more local people. 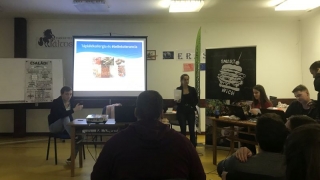 “International flavor “ - had been released