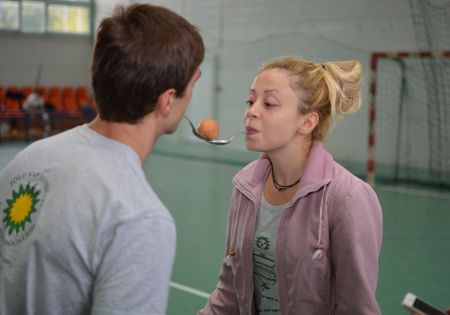 Football sala was the first game. We played with goggles but they were covered with insulating tape. We could see partially. We played twice and the match went on for 10 minutes. We won: 0-1 (Szilárd) and  2-0 (Medard and Szilárd).

The relay race was the second game. It was fun. With a spoon in our mouth, we had to move to our next mate; without using our hands, only with the help of our mouth we had to give it to our mate. If the egg fell down, he had to begin again. We did a ride with a tandem. We repeated it three times. We were the best. Finally, the tank. We did a big human tank with paper from newspapers. We had to walk together but the paper couldn´t break. If the paper broke, we had to begin again. We had to exert ourselves but it wasn´t enought because we were fourth.

Photos taken at this event can be viewed on the association's Facebook page.