Cycling on the Nemere Trail

In mid-July 2011, the Hungarian National Council in Transylvania (Erdélyi Magyar Nemzeti Tanács) organized a 4 days cycling tour. The attendants gathered in front of the Sports court in Kézdivásárhely, and the goal of the tour was to popularize the concept of Szeklerland’s autonomy. You can view photos taken at the event here.

The initiative was supported by almost every Hungarian political and civil association in Szeklerland. In the morning, at registration, every attendant was given a T-shirt, with the logo of the event on it. After the briefing had been done, the group – counting 60 attendants, started off their journey, cycling through the centre of the town and following their way in the direction of Kézdiszentlélek, on the first section of the Nemere Trail. The Nemere Trail, leading through Kézdi Chair and Orbai Chair, is being set up by the Green Sun Association (Zöld Nap Egyesület) in 2011, with the help of partner organizations, and is sponsored by the Enviromental Partnership Foundation and the Tusnád Ásványvíz Rt. (‘Tusnád’ Mineral Water Joint Stock Company). The group, cycling for the autonomy of Szeklerland, touched 21 settlements that had been marked on the Nemere Trail, in the past several weeks. You can find out more about the Nemere Trail, on the site created especially for this project. After having cycled on the Nemere Trail, the bikers continued their journey on the Sepsi Green Trail. This cycling tour was also destined to be a tour for discovering the sights and cultural values of our region. The bikers had the opportunity to visit the most important cultural and historical places of the settlements, they passed through. In the evenings lectures were being held. The bikers reached the terminus – the Tusványos Free Summer University, on 22nd July. Written by: Ráduly Attila Translation: György Andrea 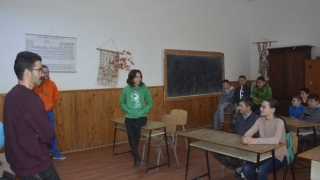