Draw Exhibition – The school of my dreams

On Sunday the 12th of April the Pro Pectus Association and the Green Sun Association organized the fifth time a drawing contest. It was for children with the age of 5-14 years. They had to draw the "School of their dreams". One of the Volunteers from the Green Sun Association, Melissa Öller from Austria was a member of the jury, she had to choose with two other persons Máthé Réka and Erőss Sándor,‏ the best drawings from the contest. It was not easy for them to choose, because the drawings were all very nice and creative. Photos from the event are available on the Facebook page of the association.

The Exhibition started at 16:00 o'clock. There were around 80 people with different ages. The drawings were all on the walls, so the people had the chance, to see all the beautiful pictures. At the beginning Sütő Mária Rita, president of Pro Pectus Association speak about the drawing competition. After that a little boy had prepared a nice poem for the people. In the programm there were a group of three girls with traditional clothes who singed traditional music , it was really nice. Than the jury spoke about their feelings, what they felled when they choosed the best one's, and that it was hard to choose. Ráduly Attila, president of the Green Sun Association sayed that the increasing number of the drawings shoes the need of organizing the contest in the following years too.. Finally, we have the winners announced, and they got prices and diploms. Again, Congratulation for all the participants and the winners, and keep it up to draw! Author: Melissa Öller 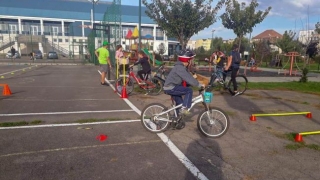