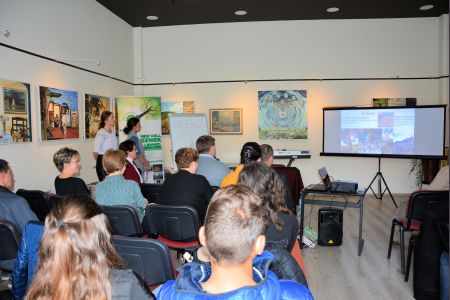 It has become a tradition for the Green Sun Association to organize the Green Days in Spring. Back in March 2010 we weren’t sure if this was going to be an annual program but thanks to the success of the event and the hard work of the organizers yet another string of events took place between 21-23rd April this year. Photos taken at the happening can be seen on our Facebook page.

The purpose of the events which also included the date for Earth Day is to shape the environmental attitude of the community in our region. The 3-days happening began on Friday at noon at the Green Sun Association office, where the ‘Don’t Trash Our Future: RRR Project’ was presented. Thanks to this project we have the pleasure to host 3 European volunteers in our town for the duration of a year. During the press conference the new EVS volunteers had the opportunity to introduce themselves. The Turkish Ayse Büsra Yilmaz comes from Istanbul. She specialised in Communications then worked as an editor at a Turkish daily newspaper. The Armenian Haykuhi Harutyunyan is 27 years old and comes from Yerevan. She graduated from Psychology at the Armenian-Russian University. At the moment she is taking her PhD and she’s been dealing with disabled children as a nursery school teacher for 5 years. The Spanish Isabel Maria Fernandez Roman is 24 years old and she’s been a volunteer in a small town near London.

Ráduly Attila, the leader of the association presented the goals of the program and pointed out that the so called ‘Green Sun School’ operates at 4 locations: Kezdikovar, Albis, Lemheny and Kezdimartonfalva. Attila was happy to announce that another Spanish speaking volunteer would be joining the association in the summer, who would be doing the volunteering service on their own expenses rather than as part of the EVS program. The bike skilfulness competition scheduled for the afternoon had to be postponed due to the unpleasant weather. The first day of the string of events ended with the presentation of Ferenc Salamon’s book ‘El van butulve’. The audience got an insight into the meaning of phrases used in the Three Chairs region. The author managed to maintain the interest of the audience through his witty and exciting delivery about the origins of his book and about the idioms described in it. Most of the expressions, idioms reflect the value system and specific world of the ancient Szekler communities, Szekler people’s sullen resistance towards weather conditions, overwhelming fate, destructive historical forces. One of the author’s main goals was to have Szekler idioms be blended into the oneness of the Hungarian vocabulary. Salamon Ferenc firmly believes that the refining of Hungarian language is very much reliant on the conscious borrowing of words and expressions from dialects. The collection comprising more than a thousand idioms is a proof that Szekler people are not only perpetuators but also the creators of tradition whose lexical ingenuity is enjoyable and entertaining.

The Sunday presentations started with Dombai Hanna’s performance on the flute. Hanna is a student at Bod Péter Training School. Following this ‘Old curency, old coins’ was presented by numismatist Sólyom Zoltán. First of all he acquainted the audience with the concept of numismatics then showed part of his collection. We learnt that numismatics originally dealt with the collection and study of old coins and was regarded as a hobby of well off amateur aficionados. Numismatics is one of the most important written sources in history as there’s a lot of information that can be established by examining a coin. We learn about the year in which the coin was laid out, about the current ruler of the year, about the coin’s value and the form of state and the linguistics of the period become apparent as well.

The ppt presentation was followed by Hanna Dombai’s recital then the lead was taken over by Nagy István, vice-president of the Hungarian Astronomers Association in Transylvania who talked about thunderbolts. Nagy István also runs his private meteorological station at Vlahita (Szentegyháza) so in his presentation he explained how we can protect ourselves in case of impetuous stormy weather. He also shed light on the causes of the formation of thunderbolts. An interesting fact is that thunderbolts form not only in stormy weather. Electronic charge can be formed in various places, even in deserts. In case of a storm, the presenter warned, it is definitely counter-wise to seek shelter under the leafage of a tree and could be a potential threat to your life. When at your home it is advisable to avoid using computers, landline phones and electronic devices. In case we are outdoors we should head down towards the valley instead of running up towards the peak of a mountain. Instead of finding a place at a clearing it's advisable to choose the woods. If possible get into a car where there’s more chance to avoid being hit by a lightening. When we find ourselves in the middle of a great storm and there's nowhere to go, what we can do is to keep calm, take a squatting position and cover our ears.

Nagy István’s presentation was followed by Béres Erika’s singing performance, afterwards pedagogue Kis Emese and her students acquainted the audience with a comprehensive presentation about the plaques placed on trees in the Three Chairs Region. The project Our Cutural Heritage – Tracing Plaques in the Three Chairs Region was led by project coordinator Kis Emese and it comprises the mapping and the marking of plaques in memory of Queen Elisabeth and the famous people of the Millennium. The trees fit up with plaques were presented by Szakács-Simon Orsolya and Bene Krisztina.  As part of the project the students of Bod Peter Training School paid their visit to 75 communities in the Three Chairs region.

The literary moment was delivered by Klára Kamilla who performed Jozsef Attila’s poem put to music ‘Kertész leszek, fát nevelek’ then another presentation followed by mushroom grower Szőcs Csongor from Kézdivásárhely about the home gardening of shiitake and oyster mushrooms. He used the help of picture slides and a special sack used for growing mushroom and a beech log. We learnt that the most often grown mushroom in the world is the champignon followed by the shii-take. Oyster mushroom is a type of mushroom that can be found in our forests as well. It has all the important trace elements indispensable to our organism. It can be grown in two ways that is on hardwood logs and in sacks. Growing oyster mushroom by the use of sacks involves the making of the sacks in the first place. Small holes are cut into the sacks then they are submitted to heat treatment which means the straw inside is treated at a high temperature inducing the formation of biotic bacteria that are crucial in the process of growing mushrooms. Following the heat treatment the temperatures are dropped and the sacks are woven with mycelium. A sterilised environment and the proper temperature must be reached in order to avoid the contamination of the sacks. 15-20 days following the first crop another growing cycle begins, one sack yielding 3-4 produces. Shiitake is also considered a mushroom type that fights cancerous tumours, boosts the functioning of the nervous system and the immune system. Although shiitake mushroom can be grown both on a log and in a sack, the use of a hardwood log is recommended. Rhombus shaped holes are drilled into the log then they are inoculated with mycelium by the help of a pipette, they are disinfected and sealed with wax. During the growth there mustn’t be any contact with the sunshine and the mushrooms have to be constantly watered so that they develop nicely. The growth of this type of mushroom requires great warmth, but humidity is also indispensable in the growing process.

Jánó Kinga student of the ‘Bod Péter’ Highschool enchanted the audience with her singing then Marosi Károly did a presentation on the world of bees. Marosi Károly the reformed priest in Dálnok is a bee-keeper in his spare time. First of all he described the position of bees in the world of animals and their critical importance in the world. Bees live in colonies. There’s a queen bee in every bee colony which lives 4-5 years, its main role being the laying of eggs and holding the family together by the help of its pheromones. There are a maximum of 4-500 drones in a hive and their life span is 1-1.5 months. Their primary role is to mate with the queen bee in order to ensure future generations of honey bees. The interesting thing about them is that they don’t have a sting. There are 60-70.000 workers in a hive at summer and 10-20.000 in the winter. They live for approximately 6 weeks in the summer and up to a few months in the winter. Their role is to clean the hive, to feed the larvae, to build the honeycomb, to gather the pollen and nectar, to take care of the brood. They have stings and they are not afraid to use it. Bees play an important role in nature. 78% of their use is to pollenate, beekeepers only benefit 22% from them. Honey is indispensable from the point of view of a healthy diet.

The main attraction of the evening was examining the skies, the astronomer Nagy István describing the sky-scape at spring, showing the then visible constellations and orbs. The Association would like to thank its supporters and partners with special mention to the Local Council, the ‘Vigado’ Cultural Centre, the Erasmus program and all volunteers that contributed to the organizing of events. 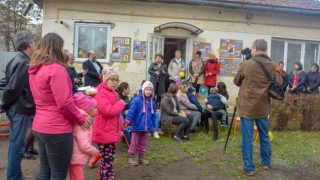