Our journey started on a cold December morning, first from our hometown, Targu Secuiesc to Bucharest. Little did we know, that our winter coats should have been left at home - December in Tenerife is like an unusually hot May where we are from. Our team was made up of our leader, a young employee of Town Hall in Targu Secuiesc, four high-school students and a university student. Photos from the event are available on the Facebook page of the association. At first, we did not know what to expect from the exchange, but all of us were filled with high hopes, all of which, looking back at it now, were not unreasonable at all. During this 9 day exchange in Tenerife, the most well-known island of the Canaries, we had the chance to get accustomed to local traditional aspects, while getting to know each others cultures respectively. The three other teams who participated in this program were from Latvia, Lithuania and Spain (Canary Islands). I believe I can speak for all of us in the Romanian team when I say that each day was a remarkable experience, unique in its own way. We will always remember the team-building activities, the hikes on Mount El Teide and along the seaside, the trekking, the time when we were introduced to an almost therapeutic form of physical labor that we called "cat killing" (getting rid of a kind of plant that is invasive for the island's environment), which helped all of us in getting comfortable while getting to know each other. It was most pleasant to see the way everyone opened up, at their own pace eventually, and become a part of a larger group. Each and every one of us went out of our comfort zone for 9 days during the various activities the hosts of the exchange prepared for us. We followed schedule every day, and succeeded in creating a very soothing atmosphere. For achieving this, we would like to thank the organizers for their strenuous efforts. In the first few days, each country presented their customs and traditions, which was a great way not only to learn about other cultures, but also for the birth of numerous inside jokes, a feature that only develops if we get comfortable with each other. The Latvian group tried teaching us a bit of their language, the Lithuanians invited us for a traditional Lithuanian Christmas night and the locals presented us the Canary Islands in detail. Our group, the members of which were schoolgirls Orbán Renáta, Bartha-Veress Anna, Kovács Ildikó, Papp Henrietta, university student Imre Júlia and our team-leader Ramneantu Krisztina, gave an insight into Sekler culture, traditional foods and folk dance. Every night we had an evaluation of that particular day, where everyone had a chance to speak about their best or worst moments from that day. This was always a productive discussion, which was organic to our exploring of the island and learning about other cultures, as well as learning about ourselves. By this, the name Iceberg Europe has achieved its scope - we got to explore the bottom of the iceberg. We would like to thank the Green Sun Association for giving us the chance to represent our region at the Iceberg Europe Youth Exchange in December 2015 in Tenerife. Author: Imre Júlia 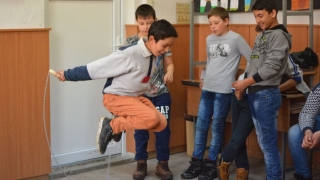