Man and Nature photo exposition in the gulid city

The Green Sun Association announced photo contests for several times since it was founded. On this summer they came up with the 5th contest which theme was: Man and Nature. The exposition was presented at different venues: after the exposition has hundreds of viewers in Anselmo Inn, the organizers moved it to Sepsiszentgyörgy to the Bástya coffe pub. The exposition was open for visitors from 7th to 23rd October. In Kézdivásárhely the opening even took place on 31st October, 5 PM in the ground floor hall of Vigadó. The aim of the contest is to draw attention through the works of photographers on the close relationship between man and nature, on it’s beauty and to encourage people to protect it’s values. The contest took place on zoldnap.info website. During the four-week period of time given for sending the photographs, 328 photographs arrived to the organization’s e-mail adress from 111 competitors. Now 40 photographs from 28 competitors can be viewed. This couldn’t be realized without the help of Bethlen Gabor Fund, Niko Kft and Vigado. We would like to thank you for the support in the name of the organizers from the association. Being a „travelling” exhibition, it will be also viewable at Kovaszna in the hall of Tourinfo office, on the first floor. List of the rewarded: I. prize: Egyed János – Barát (Csíkszereda) II. prize: Urák István (Köpec) - Front III. prize: Moldován Zsolt (Kézdivásárhely) – Green hills Praises: Miklós Károly (Sepsiszentgyörgy) – On the bosom of mother nature Vremir M. Márton (Kolozsvár) – Don’t hurt me Tóth Tamás (Debrecen) – Foggy morning Audiance prize: Péter Dániel (Marosvásárhely) – Fairy Boglárka Congratulations to all winners! 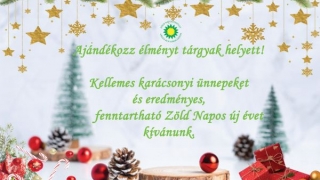