On October 12 – 13, 741 people took part in the 8th edition of the 24 hours running day. Green Sun Association and the Sports Office of the City Hall Kézdivásárhely organized the event in order to promote running and to motivate people to practice a healthy sport by running at least one lap.

Photos taken at the event are available on the association's Facebook page.

On behalf of the organizers: Zoltán Kocsis and Attila Ráduly 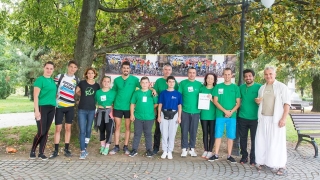 “Bike for a good aim” event