More than Eighteen Thousand lei for a Good Cause - Bike for a good aim! 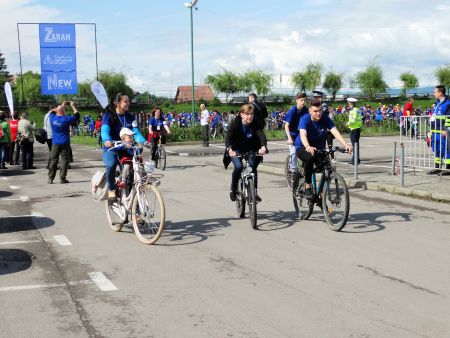 The Covasna County Community Foundation together with the Green Sun Association on Saturday morning organized the third round of fundraising - Bike for a good aim! - to which 712 cyclists have registered. The main partners of the project were the Târgu Secuiesc Municipality, SC. Zarah Modem and New Fashion S.A. Photos are available on the association's Facebook page.

Each pedal tour was 4.5 km long and costing at least 5 lei, money that cyclists sponsors have paid for the pedaled tours. Thus, cyclists have pedaled 2530 laps,  that is, 11,385 km. Of cyclists more than 120 cyclists have pedaled over 5 laps. The result was above expectations because the organizers wanted to raise 14,000 lei and raised 18,400 lei. Each participant received sweets, mineral water, shirt, route map, stamp card. 550 cyclists wore Zarah Modem and New Fashion S.A SC shirt,  being sponsored by these companies. From the SC. Zarah Modem and New Fashion S.A team made part also the volunteers from the Benji dog shelter, the Molnár Józsiás and Petőfi Sándor schools, the Functional Fitness team, the Youth Organization of Târgu Secuiesc, the Szeretet School led by Kelemen Katalin, the Crossfit team. Also with many participants came SC Secuiana S.A, Sc. Nexxon S.R.L., SENSO, Caritas Alba Iulia, Manna Christian Association. The youngest participant was

Székely Erika , 3 years and 4 months, and the oldest Szőts András, 73 years and 5 months old, who came from Budapest. Most laps (14) were patched by Demeter Zsolt, Czifra József, Kovács Tihamér and Szigyártó László. Of them, a  500 lei voucher was gaven by lot The price was offered by Tulit Zsombor altitude / vice president of the Community Foundation. The voucher was won by Demeter Zsolt. Another prize was won by Czifra József and the prize consisted of a gift package offered by SC Senso SRL. SC. Zarah Modem and New Fashion S.A. has made available to the participants 3 bikes that were drawn by lot of those participants who have pedaled at least 4 laps. The winners were Opra Beáta, Szabó Vince and Gyenge Attila. From the gathered money will be build a playground for children with special needs and at least 5 bicycle racks on the most intense arteries in the city. The Salvatore Association took care of the health and safety of the participants in the event and the Women's Association from Târgu Secuiesc offered homemade cakes to the participants. 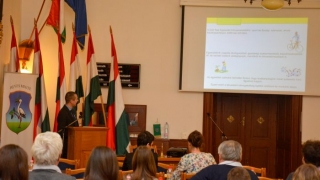