On 13-14 August took place the designation of the last part of Nemere Trail green route. The main sponsors of the IV. Nemere Trail Camp were Enviromental Partnership Foundation and Tusnád Ásványvíz Rt. Photos taken at the event can be viewed here. At the event organized by the Green Sun Association and Cholnoky Jenő Geographic Society the teams were cycling through the following settlements: Kézdivásárhely, Torja, Futásfalva, Ikafalva, Csernáton, Kézdialbis, Dálnok, Maksa, Eresztevény, Réty, Bita, Nagyborosnyó, Feldoboly, Kézdivásárhely. After eating the potato stew at the camp formed at the school of Maksa, the participants could listen to Kocsis Zoltán’s solo guitar play. The organizer’s aim with the Nemre Trail Camps is to draw people’s attention to an active lifestyle, to designate and promote Felső-Háromszék’s first green route. We would like to pay attention to sports, especially to cycling. The positive environmental impact of these actions are not negligible. Besides we want to highlight Transylvania’s touristic values at the boundary areas, the small communities common problems and their cohesive power. “During the recent days we’ve managed to get a lifetime experience.”-says Katalin Derzsi, a participant from Sepsiszék, who had cycled all four camp’s path. The project manager says thank you to Nyírcsa Melinda, the head master of Orbán Balázs primary school of Maksa for making available the educational institution free of charge, as a location of the camp. Gyöne Anna and Tőrös-Szőke Enikő could participate to a one hour massage, offered by Székely István Yumeiho massage therapist from Kézdivásárhely. Partners of the program were: Orbán Balázs primary school of Maksa, Pro Ozsdola Interethnic Association and the KSE Bicycle Department. Our supporters were: Communitas Foundation, Promobil and Tekergő bicycle shop. Details of the route can be found on the portal dedicated to this issue. 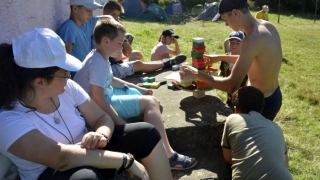