Last Wednesday afternoon, Ikafalva population could know more about two regions in Spain: Castilla y León and Galicia! Tea event started at 18:00 whilst cold temperatures were under 0 degrees, and beginning with Spanish stereotypes people could get involve and break down with the idea of Spain: as an example paella, high temperatures all the year or flamenco, things that are not normal in their regions. More pictures of the event here.

A cozy room full with people was the perfect place to show them a piece of the huge country what it’s Spain. After stereotypes, was the turn to find out Galicia, a green area surrounded by Atlantic Ocean where fishing and yard ship is the main economy. Furthermore, when was gastronomy time we could see some surprising faces because the octopus: one of the most famous dishes there. Also typical alcoholic drinks, desserts or some traditions were showing and an almond traditional cake was giving from them to taste; indeed Santiago de Compostela’s cake, famous due to the pilgrims way “El Camino”.

Later was the turn to Castilla y León and Enrique showed a video where he born. Also he added pictures about the nine counties of the region, highlighting Segovia aqueduct; a big roman construction used for transport water. It’s the bigger region in Spain and its very important due to the cereals and he explained the importance of the exportation abroad; as an example he told us about biscuits Gullon, made it in Palencia, and you can find in Kézdivásárhely. Beautiful cathedrals and traditional dances were part of the presentation, and some people could find similarities with this area. This region also it’s well known for the wine and convent sweets.

To end the intercultural event, participants could enjoy tasting a Spanish omelette, Santiago de Compostela’s cake, Hungarian cakes and enjoy with a tea meanwhile the tombola was celebrated. 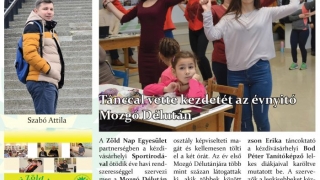