Yesterday, 26th March, was the Spanish National evening at cultural house Vigadó presented by Gema Puerma Castillo, EVS volunteer in Green Sun Association. Photos taken at the event can be viewed on the facebook page of the association.

This evening is part of the continuation of the last five national evening. Events begun by Ieva Brikmane and Gayane Asatryan, the two volunteers of the last year. But it was the first for the three new EVS girls. Lot of people showed great interest in this event despite the snow. Gema began to speak about her country in general. She explained that in Spain, like here in Romania, there is some minority with their own culture and dialect. Spain is one of the European countries who still have a king on the head of the country. But the power is share between him and the government. She showed video about some beautiful monuments, a part of them influenced by Arabic culture. You can find a lot of different landscape: beach, mountain, desert… Although each region has its own festival, some celebrations and traditions are still very important everywhere the country. One of them is very interesting, twelve seconds before midnight, on the thirty one of December, people eat twelve grapes for each second. Gema comes from South of Spain so she explained a little bit more to the audience about her region, Andalucía. In her area most of people lives because of farming of olives. It is the most important grower of olive in the world. All of this evening was accompanied by traditional music, which is very important in this country. After this little presentation, Gema gave a little dance lesson for everyone who want to know some basic steps of sevillanas, traditional dance from her region. At the end of this events, people had chance to taste tortillas and gaspacho, Spanish traditional food. 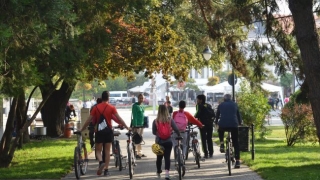