Take the bike and not the car! - Critical Mass

On the 18th of September the Green Sun Association, Europe Direct office and the Sport office organized the Critical Mass. The weather was perfect and there was coming almost 90 -100 people to come with us on the bike. Photos of the event can be viewed on the association Facebook.

It is very important to do this event, because it makes people aware that it is healthier for us and for the environment, if we would often take the bike, instead of the car. At first we made a line with always two or three biker side by side. On the front and at the end there were a police car they made the way for us free. We started at 17:00 o'clock at the Sport stadium. The way of the route was to drove around the center and back to the stadium. At the end the Europe Direct office gave a lots oft gifts for the people. The gifts were: T-shirts, clocks and pinnys. The next time hopefully it will comes more and more people. So take the bike because it's good for your healthy and for the environment :) 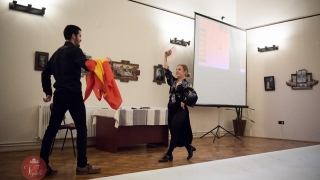