They returned with the second prize in the category: Preserving Tradition

It was for the fourth time that the Transylvanian Captaincy of the ‘Szabadtűzi’ (fire in the open air) Equestrian Order organized the cauldron-stew festival, within the confines of Kovaszna Days 2011. Photos taken at this event can be seen on the facebook page of the Green Sun Association.

The 21 participant teams were given tents, tables, cauldrons and 3-4 kilos of potatoes per group by the organizers. The president of the jury was the Hungarian Bodnár Ferenc, first-rate cook. Besides giving diplomas of participation to all of the teams, the jury consisting of several people, offered prizes in different categories for the best teams. Prizes were offered in terms of Preserving Tradition as well, in which category the third place was taken by Finom Falatok Kovászna (Delicious Bites Covasna), the second one by the Green Sun Association from Kézdivásárhely, and the first prize went to Őszülők bográcsólói (Grey-Haired Cauldron-Cooks). It was introduced as a novelty, that for 6 RONs, one could purchase a counter that in turn could be exchanged for a portion of delicious cauldron-stew. The winners of the contest organized on 3rd September were the following: third prize: Székölök (Szekler kids) team, second prize: Tutisó team and the first prize: Szent György Sárkány (Saint George Dragon) team. The head cook of the GSA team was Péter János, the honorary member of the association. ‘We considered important that traditional elements be expressed at their best; for that reason Fejér Ameli Lilla – one of our volunteers – served food in traditional Szekler wear. The ornaments on the table were predominantly of the sunflower motif.’ – declared Ráduly Attila, the president of the association. The Green Sun Association would like to thank Fejér Éva and Derzsi György for their support. 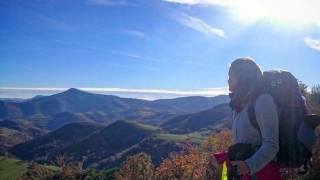