THINK GREEN PROJECT! COLOR THE LIFE is about to end

Volunteers from Green Sun association say goodbye to the EVS volunteers hosted in previous months. It was the third project that the association implemented in the city of the guilds. One of the aims of the project was to lead the activities of the green school program. Environmental education was conducted with the application of tools and methods that help man to get closer to the nature. The free activities received the Green Sun School name.

The project also promoted the possibilities offered by the European Voluntary Service program. The success of it is proven by the fact that more young people from Secklerland went to volunteer internships on shorter, longer time abroad. The project also included the implementation of the regular events of the association, holding national events as well as the language courses. "We believe that as in the past years too, we leave behind us a successful period. Celine Berthier, Melissa Öller and Clara Sanchez Bejarano, the three volunteers earned new knowledge, which certainly will be useful in their future. We learned new languages, we organized events that mobilized hundreds of people and not least we signed new partnerships. "- Said the project coordinator. The "Think Green! Color the life" was funded by Erasmus + Among the future plans of the association is to host new volunteers. 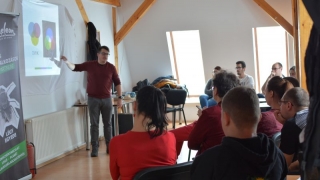