As a volunteer at the Green Sun Association - Vajda Timea

I joined the Green Sun Association before its first anniversary. But why? My main reason was that I love nature, and it is important to me to keep the nature clean and cared, and beside of this to create in people a conscious environmental thinking. Another reason was that I have wanted to try out the volunteer life at a non-profit association. I am satisfied, and I strongly recommend to try it out yourself, because you can’t lose anything. At the one year anniversary event, I was able to look into their previous work. I found it very interesting and I was sure that this group will bring something new to my life. This soon has happened. I have learnt a lot, and I met new people and personalities. A lot of these people became my friends very soon. This life of volunteering gives me a lot of chance to try out new things. Including riding a bicycle after a long time, making origami with children, cooking with girls at the playground building, collecting cooking oil, making photos and this list could be continued. From all the events, in which I took part, the biggest experience was the playground building project, in which during a great team work, the pre-scholars’ waited playground was built. Finally, I can say that I am very lucky to be the part of this group as a volunteer and I wish an eventful future for us. 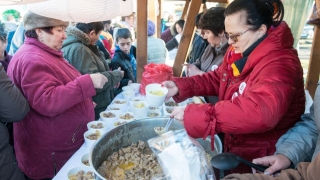