We said goodbye to the volunteers of the project Let`s move! 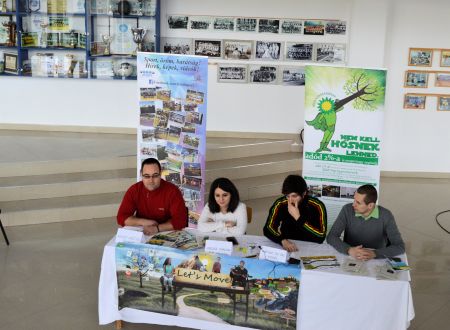 Green Sun Association, at a press conference Thursday officially took goodbye from the volunteers of the project Let`s move! The main goal of the project was and it is to promote healthy life and sport trough non-formal activities. Let`s move! Project is the fourth of its kind (EVS) in the city of guilds co-funded by the  Erasmus + Program. Photos from the conference are available on the Facebook page of the association.

Ráduly Attila, association president spoke briefly about achievements during the volunteer stage, after which presented a video, produced by Enrique de Paz Miguel, available on the organization's YouTube channel too. President of the Association presented the main partners of the project, with they had worked together, emphasizing the good partnership between them and Sports Office representative Kocsis Zoltán. In the table tennis school activities volunteers of the association assisted children so while playing children had the opportunity to practice sports in addition to the ability to speak in English.
Greens from Targu Secuiesc also focused on promoting the European Voluntary Service, which efficiency is proven by the send volunteers in foreign countries. At the same time, the project also included conducting national evenings, language clubs and activities from traditional events of Green Sun Association.
"We believe that as in previous years too,  we are leaving behind a successful period, volunteers Zhenya Ohanyan from Armenia, and the two Spanish volunteers Enrique De Paz Miguel and Silvia Gonzalez Blanco were enriched with new knowledge, which they can use in the future.
We learned foreign languages, we mobilized hundreds of people at various events organized in several regions of the county and not least we have concluded numerous partnerships with several institutions. - assessed the project coordinator.
Ráduly Attila revealed that in early April will arrive in Targu Secuiesc three new volunteers - from Turkey, Armenia and Spain-and that they will help the association in the future events, projects.