On March 14. 2018. the 11th- A grade pupils at the Bod Péter Pedagogical High school in Târgu Secuiesc hosted EVS volunteers Haykuhi Harutyunyan from Armenia and Isabel Fernandez from Spain. The two were accompanied by Ráduly Attila and Derzsi Katalin. For more photos, please visit the association's Facebook page.

During the first part of the day, Haykuhi presented the situation of women in Armenia. Students had the opportunity to travel to Armenia virtually and to know the lives of Armenian women in detail. They also talked about Armenian culture in general and about the history of the country. After a short break came Isabel Fernandez's turn to present the culture of Andalusia (Spain). Isabel also spoke about the fact that Al Andalus was invaded by the Arabs for almost eight centuries. The EVS volunteer from Spain spoke about bullfight and some of the most popular festivities, such as the event around the San Fermin festival, tapas, gastronomy and dance.

The event was possible through the Erasmus + program, and the friendly welcome was provided by Mrs. Kis Emese. 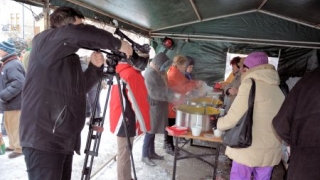